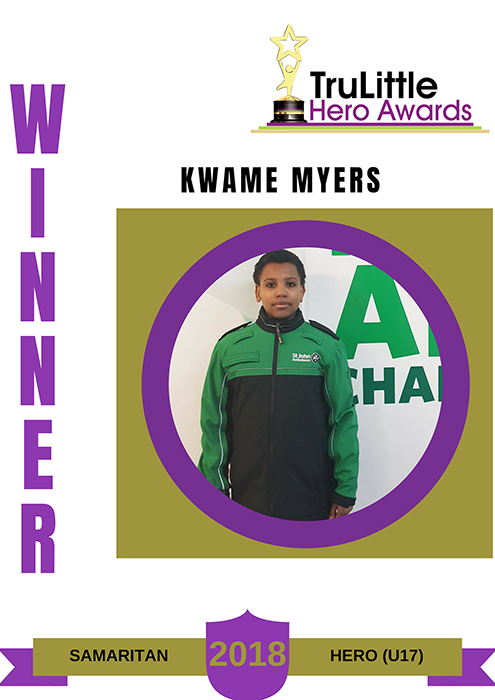 Kwame was born an extremely premature twin at 23 weeks. His brother passed away when he was three weeks old and Kwame stayed in hospital for the first six and a half months of life. He had heart surgery, renal failure that reversed and numerous infections where he was expected to die also. He was ventilated and on Oxygen for the first year and a half and was under hospitals for the first 6 or so years. More recently he now has a few diagnosis of Special Educational needs but doesn’t limit him. He is a lover of First Aid and wants to be a Paramedic something he has said since the age of two or three. He has Campaigned for early babies, visits his hospital of birth, done Press work raising awareness of Prematurity for BLISS the Premature baby Charity as a Case Study and taken part in much research with UCLH especially. He also won Cadet of the Year in his unit, got a Medal for 36 hrs of Service and got his Bronze Grand Prior Award that was presented to him by the Mayor of Islington. He is a kind and Compassionate child who genuinely wants to help others and talks of setting up a Charity alongside his job. He is currently a St John’s Ambulance Cadet and has now began to cover Events as he ages. He is also keen to go to Training most of the time they happen and reads his first Aid manual avidly. He was also a St John’s Ambulance Badger for two years achieving his Gold badge. He hopes to go onto the Duke of Edinburgh Award as soon as he is old enough. He is also a published Author in Anthologies, Blogger with his own Website and Artist especially keen Photographer and Film- maker taking part in Whitty-Gordon Projects. His coach said “Kwame has made a very positive impact on our academy in the relative short time he’s been here. He’s been a leader and influences others to work hard to achieve their goals. He’s charitable nature has come to the forefront. He was excellent in participating in our Leaders Serve Program giving food and clothing to the homeless.” He wants to make the world a better place and help Community. Further links below: www.kwamemyers.com (blog/website) www.epicure.ac.uk/our-young-people/Kwame